Reconciliation North Bay is a community-wide collaboration between the business, education, social services, academic, government, justice, arts, and faith sectors to promote an increased understanding of the issues faced by Indigenous peoples and to work towards reconciliation in the community of North Bay. We will help publicize and promote all initiatives by local organizations that respond to the 94 Calls to Action of the Truth and Reconciliation Commission. This local initiative is part of the broader North Bay Urban Aboriginal Strategy (UAS) that works through Community Action Circles.

HISTORY: This country known as Canada was populated by Indigenous peoples for thousands of years prior to contact, with distinct languages, cultures, social structures, and systems of justice and governance.

When newcomers arrived barely 500 years ago, those who came in peace were welcomed in most cases and shared in the knowledge offered by their hosts, including their ways of life—how to live off the land and its resources, traverse the streams and rivers, how to build shelters for climates considerably more difficult than the newcomers had previously encountered.

So strong was the bond of friendship and respect that Indigenous peoples were instrumental in defending the land that was to become Canada in 1812 when an American invasion resulted in the only war ever fought on this soil. Within 40 years after the threat of foreign envision subsided, settlers from Europe flooded into what was becoming known as Canada, soon outnumbering Indigenous peoples, gradually forcing them off their traditional lands.

TRADITIONAL LANDS: North Bay is situated in traditional Anishinabek territory, on lands occupied by the peoples of Nipissing and Dokis First Nations whose aboriginal and treaty rights are recognized by the Robinson Huron Treaty of 1850 and affirmed by Section 35 (1) of the Constitution Act of Canada, 1982.

WE ARE ALL TREATY PEOPLE: The relationship of friendship and sharing became solemnized/ratified/represented by treaties through which Indigenous peoples were recognized by the newcomers as equals, and without whose permission, peaceful settlement would not occur.

The treaty promises of Indigenous peoples’ nationhood and land title that were to last “as long as the sun shines and the rivers flow”, were not honoured. Settler governments began a process of dispossessing Indigenous peoples from territories in which they had dwelled for millennia. 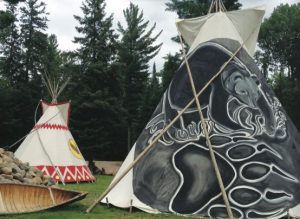 The Truth and Reconciliation Commission of Canada made the following compelling case for reconciliation:

“Aboriginal and non-Aboriginal Canadians from all walks of life spoke to us about the importance of reaching out to one another in ways that create hope for a better future. Whether one is First Nations, Inuit, Métis, a descendant of European settlers, a member of a minority group that suffered historical discrimination in Canada, or a new Canadian, we all inherit both the benefits and obligations of Canada. We are all Treaty people who share responsibility for taking action on reconciliation.” (Source: Honouring the Truth, Reconciling for the Future Summary of the Final Report of the Truth and Reconciliation Commission of Canada, 2015 p. 12.)

RESIDENTIAL SCHOOLS:  The first 150 years of the Dominion of Canada’s existence coincided with formal federal policies to assimilate Indigenous peoples and led to the implementation of the paternalistic Indian Act and establishment of a network of Indian Residential Schools. The intergenerational impacts from the experiences of Survivors of the Indian Residential Schools continue to be felt today.

Over 150,000 children attended the Indian Residential Schools. Many never returned. Often underfunded and overcrowded, these schools were used as a tool of assimilation by the Canadian state and churches. Thousands of students suffered physical and sexual abuse. Everyone suffered from loneliness and a longing to be home with their families. The damages inflicted by these schools continue to this day. In 2009, the Truth and Reconciliation Commission of Canada began a multi-year process to listen to Survivors, communities, and others affected by the Indian Residential School system. The resulting collection of statements, documents, and other materials now forms the heart of the National Centre for Truth and Reconciliation.

“I remember hearing Murray Sinclair speaking and how powerful his words were to me when he said seven generations of children went through the residential schools. And each of those children who were educated were told that their lives were not as good as the lives of the non-Aboriginal people of this country. They were told that their languages and their cultures were irrelevant. They were told that their people and their ancestors were heathens and pagans and uncivilized, and that they needed to give up that way of life to come to a different way of  living. At the same time that that was going on, non-Aboriginal  children in the non-Aboriginal school systems of this country were also being told the same thing about Aboriginal people.  As all my teachings have always spoken to the importance of remembering that we are affected by things that happened seven generations back and the choices we make today will affect seven generations forward.” (Source:  Donna Forget Correspondence dated February 24, 2017.)